THE ORIGIN AND HISTORY OF BRA

Bra which is actually a short form of brassiere, is a form-fitting undergarment designed to support or cover the wearer’s breasts. They are designed for a variety of purposes, including enhancing a woman’s breast size, creating cleavage, or for other aesthetic, fashion or more practical considerations. bra was invented on November 3, 1914. Women have been binding and otherwise supporting their breasts for, literally, ages; the first bras may well date back to ancient Greece, where women would wrap bands of fabric across their chests, tying or pinning them in the back. And the “brassiere,” as a widespread concept—the word comes from the French for “upper arm”—is generally thought to have originated with the DeBevoise Company, which used the term in advertisements for its whale-bone-supported camisoles. (French, then as now, had a certain je ne sais quoi with English-speaking consumers.) Vogue began talking about brassieres in 1907; in 1911, the word merited an entry in the Oxford English Dictionary.

But the bra—the garment that lifts and separates, via cups and straps—became part of the world, officially, on November 3, 1914. That was the day the United States Patent and Trademark Office granted a patent to Mary Phelps Jacobs for the garment she called a “brassiere.”

The necessity that drove Jacobs’s invention came down, in this case, to the fashion trends of early-20th-century America. The dresses of the time were cut for slim and boyish figures; they featured, on top of that, plunging necklines. This combination was, for the well-endowed Jacobs, awkward. While preparing for a Manhattan debutante ball in 1913, the 19-year-old became frustrated. Not only was the sleekness of her sheer evening gown compromised by her bulky corset; the undergarment also had a pesky way of rejecting the “under” aspect of things. “The eyelet embroidery of my corset-cover kept peeping through the roses around my bosom,” Jacobs recalled in her autobiography, The Passionate Years. 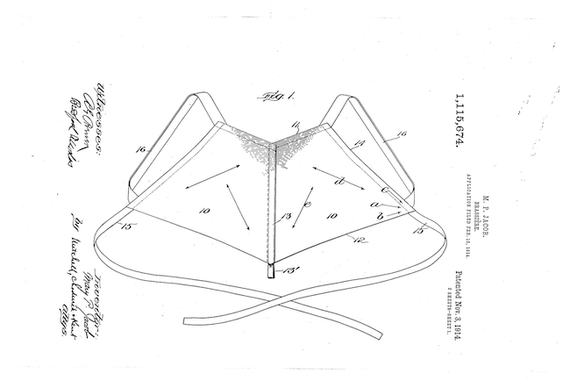 So the young socialite MacGyvered her way into lingerie. “Bring me two of my pocket handkerchiefs and some pink ribbon,” she told her maid. The two did some quick sewing. Jacobs tried on the resulting garment. When the ribbons were pulled taut and tied, the effect was similar to what was achieved with a corset—but, given the absence of whale bones, much sleeker. (Not to mention, obviously, much more comfortable.) The new undergarment, Jacobs recalled, “was delicious. I could move more freely, a nearly naked feeling, and in the glass I saw that I was flat and proper.”

Jacobs wore her invention to the dance that night. She went on to demonstrate it around the dressing rooms of Manhattan’s society gatherings. She made more models of it—using elastic bands—for friends. Soon, she went to see a patent attorney. On February 12, 1914, Jacobs filed for a patent. On November 3 of that year, she received one.

The benefits of the new garment, Jacobs’s patent application explained, extended far beyond fashion. The bra, she argued, would allow women the freedom of movement that corsets had long prevented. Specifically, she wrote,

It is among the objects of the present invention to provide a garment in which a number of features of novelty and utility are combined, among which are the provision of a garment which has no back and therefore does not interfere with any design of evening gown that may be chosen; one which is capable of universal fit to such an extent that for commercial handling it need be made in but few sizes, with reasonable certainty that the size and shape of a single garment will be suitable for a considerable variety of different customers; and to provide a garment which is characterized by extreme simplicity by freedom from bones so that it may be finished with laces or embroideries for wear beneath a sheer waist or diaphanous gown, and which when worn is both comfortable and cool and so efficient that it may be worn even by persons engaged in violent exercise such as tennis; and which has other advantages that are characteristic of the invention herein set forth.

The main advantage? The bra, Jacobs noted, “does not confine the person anywhere except where it is needed.”

A QUICK VIEW OF THE BRA TIMELINE 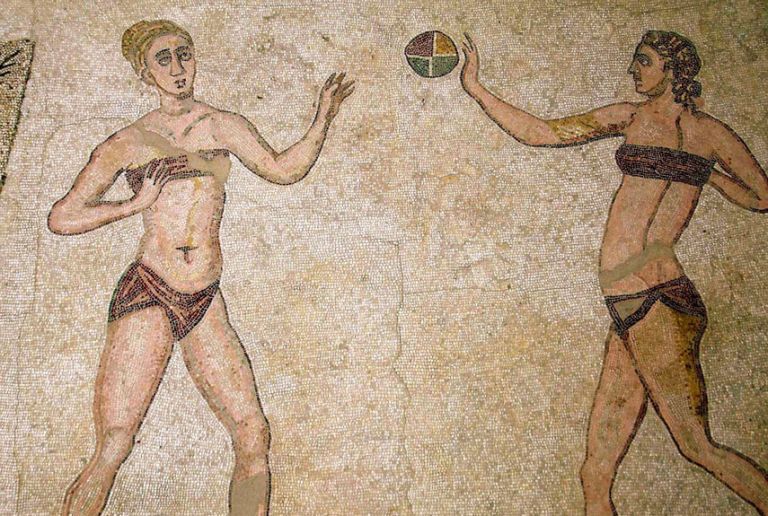 It paid to be a female Minoan athlete during the 1300s. Wall paintings depicted them wearing bandeau-like tops (for support — or to cover up!) while playing sports. Until then, women were generally bare-breasted under simple sheath dresses.
16th Century: Age of the Corset 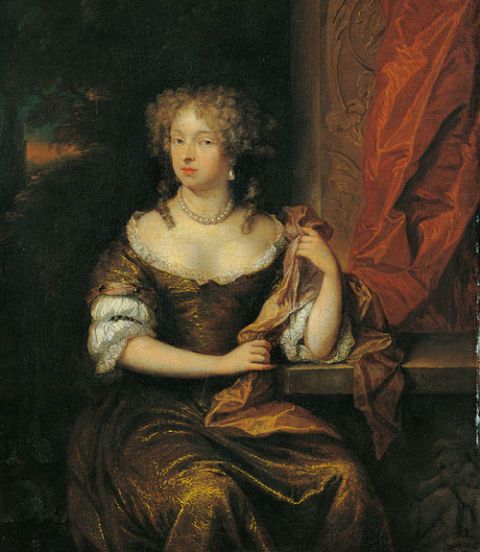 The first major shift in women’s undergarments was the corset. Women in France embraced it in the early 1500s to achieve the perfect female figure — an inverted cone shape. They flattened women’s breast, pushing them upward — almost to the point where they were falling out of their dresses. So how did they get their stiff shape? Most were made with a long piece of wood (busk) or whalebone sewn into the casing. Sounds painful, but these body-cinching contraptions were popular for the next four centuries.
Edwardian Era: Here Come the Girdles 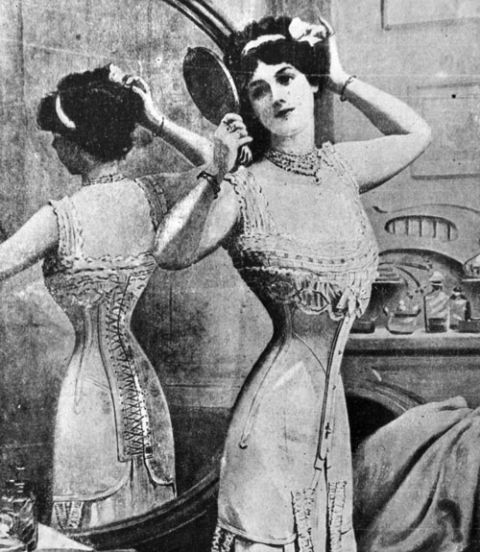 In the late 19th century, we finally saw a shift from corsets to an early form of what we now call a girdle. The weaving and busk moved from the back to the front, forcing the torso forward and the hips to jut outward, making a woman’s figure more of an “S” shape.
1869: The Corset Is Split 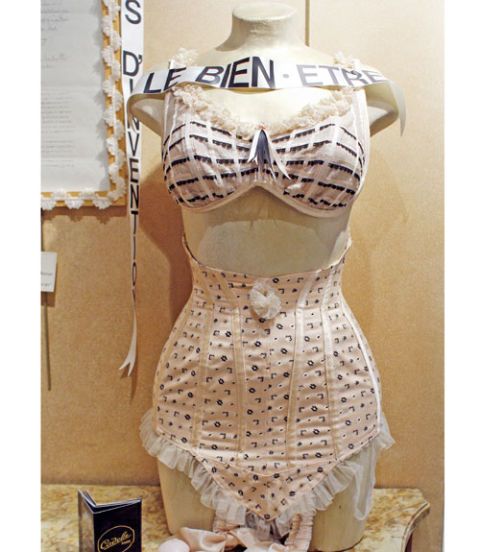 In France, the first modern bra was born, called the corselet gorge (“the well-being.”), when Herminie Cadolle cut a corset into two separate undergarments — the top supported the breasts by means of straps, while the lower part was a corset for the waist. In 1905, they started selling these new “bras” alone.
1907: The “Brassiere” Is Born 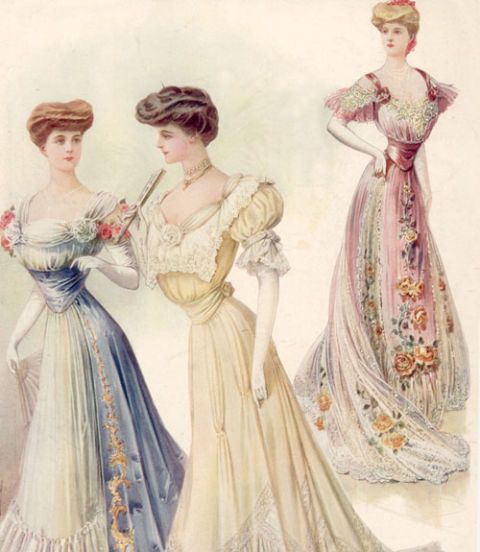 Vogue uses the word “brassiere” for the first time. It was added to the Oxford English Dictionary in 1911.
1910: The Modern Bra 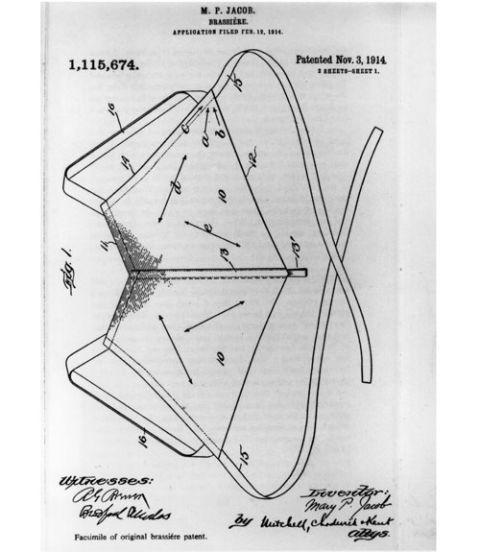 Even after the corset and bra were officially split, there was still the issue of comfort. Enter Mary Phelps Jacob, who invented the first modern bra with a pair of silk handkerchiefs and silk ribbons — sans the stiff whalebone.
1920s: The Look Is Flat 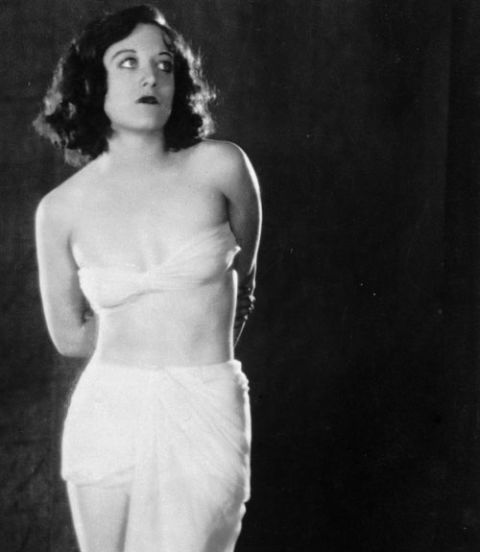 Small-chested and slender-bodied flappers took over in the Roaring Twenties, and they ditched the corsets almost completely. Instead, they opted for tight bandeau tops that flattened women’s breasts to give them a more boyish shape. 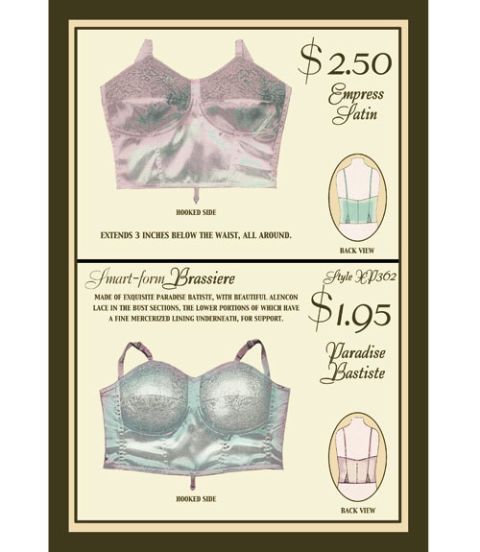 In the 1930s, the brassiere is eventually shortened to the common “bra” and large-scale production begins. But more importantly, cup sizes become a thing. S.H. Camp and Company correlated sizes of a woman’s breasts to letters of the alphabet (A through D). Adjustable bands and eyehooks were also added to these new bras.
1940s: Torpedo Style 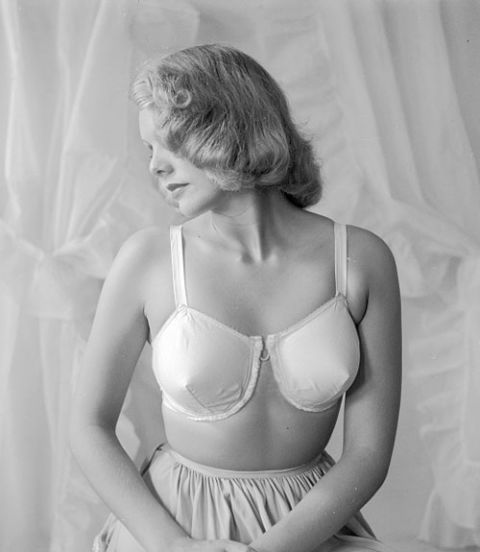 During World War II, more and more women were working in factories. Thus, the bullet/torpedo-shaped bra gained popularity because of claims that it offered added protection for gals who worked on the production lines.
1950s: Sweater Girl 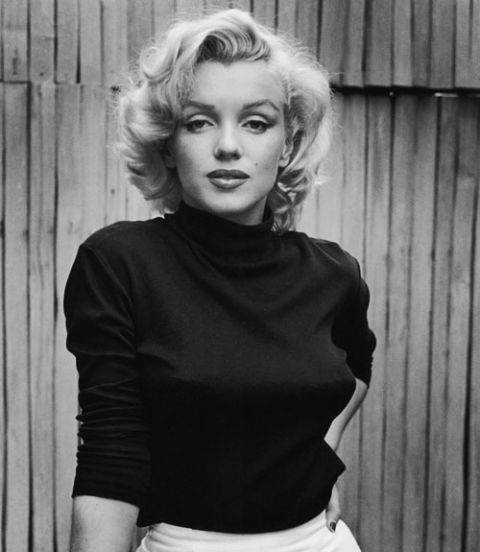 The look was popularized by actresses like Jane Russell Marilyn Monroe, which gave off the appearance of a bigger cup size.
1964: The Pushup Bra 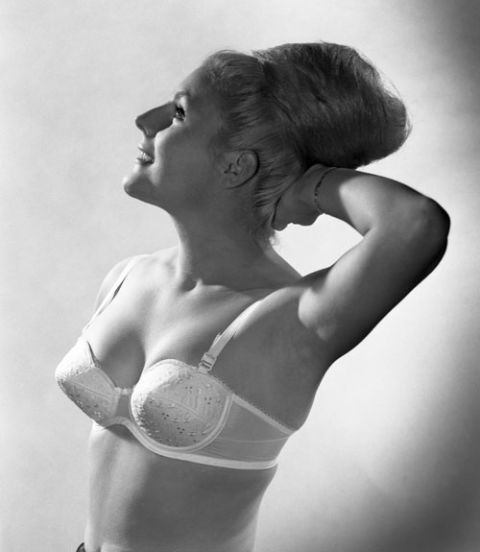 A Canadian lingerie company designs the Wonderbra — the first of its kind to lift and push the bustline together.
1967: Hello Mrs. Robinson

Undergarments played a key role in The Graduate, thanks to Anne Bancroft’s Mrs. Robinson. Not only does she reveal a, well, revealing leopard-print brassiere, but she also rocks a lacy black number, too.
1977: First Sports Bra 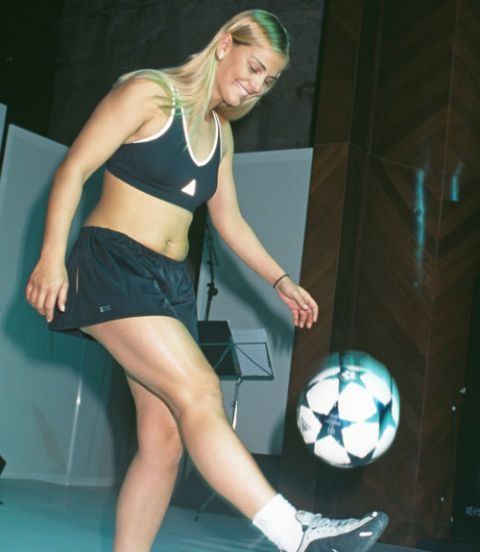 As exercising and fitness became more popular, there was a need for something much more supportive. Thankfully, the first sports bra — appropriately called the “Jogbra” — hit the scene.
1977: Dawn of Victoria’s Secret 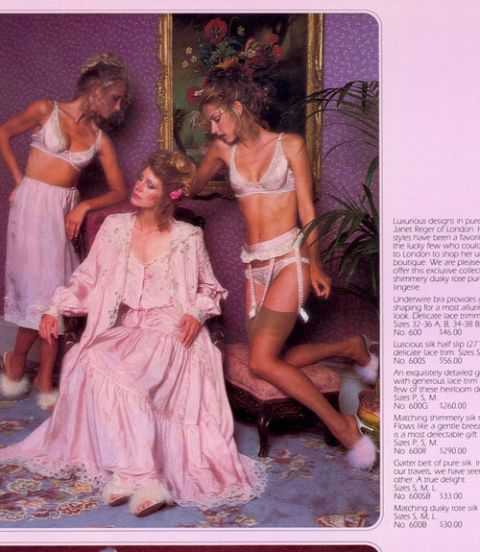 The same year the first sports bra debuted, the first Victoria’s Secret opened up in Palo Alto, California. Fun fact: Founder Roy Raymond (and his wife!) came up with the idea of a women’s lingerie-only shop because he felt uncomfortable shopping for his wife in department stores.
1990: Madonna’s Cone Bustier

During Madonna’s Blonde Ambition Tour, she wore one of her most iconic looks yet: a Jean Paul Gaultier-designed pink cone bra. In 2012, it sold at an auction for $52,000
2000: Bejeweled and Expensive

Gisele Bündchen’s ruby and diamond-encrusted bra and underwear set, which she wore during the 2000 Victoria’s Secret fashion show, were valued at a whopping $15 million. It’s still the most expensive lingerie set ever.
2009: Today 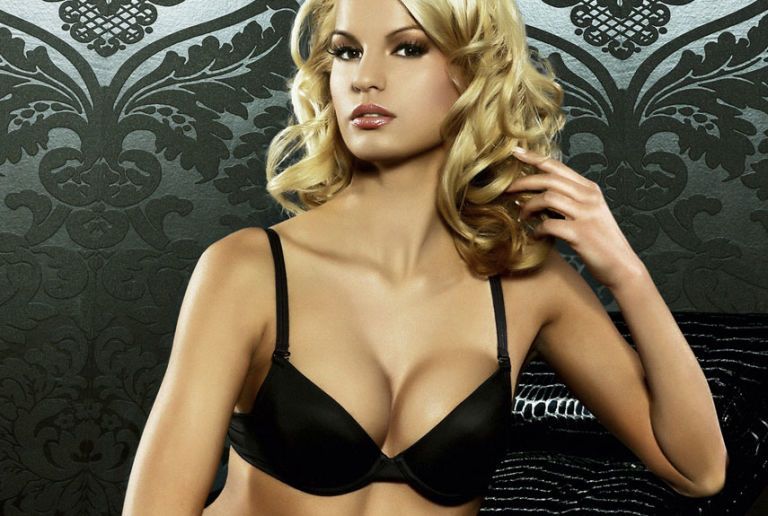 The 2000s brought an onslaught of new designs like strapless, one strap, and even a resurgence of corset bras. You can even buy cups made with memory foam that conform to the shape of your chest.
CLICK & SHARE

Questions to ask yourself during tough times

HOW TO KEEP GOOD FRIENDS FOREVER

Why Do Humans Have Pubic Hair?