Musk’s starship could one day be the spacecraft that will take mankind to Mars.

But it won’t just be an Earth-to-Mars transportation vehicle.

New images released by Elon Musk, as well as people who traveled near the site where the spacecraft is being assembled, have gone to Twitter and posted a number of images showing the progress Elon Musk’s company is making in putting together the spacecraft of the future.

Musk has big plans for the Big rocket.

The base section is getting shiny. pic.twitter.com/tlENYL5kMR

Musk has posted a number of images showing engineers at work around the nose of the spacecraft.

One day, Starship could lead the way in the exploration of our solar system and could be used by future space explorers to travel beyond Mars, into the unknown.

But as they say, Rome wasn’t built in a day.

And neither is Musk’s rocket. Engineers are working around the clock to put together what is going to become the largest rocket ever. And why hurry?

Slow is smooth, smooth is fast. 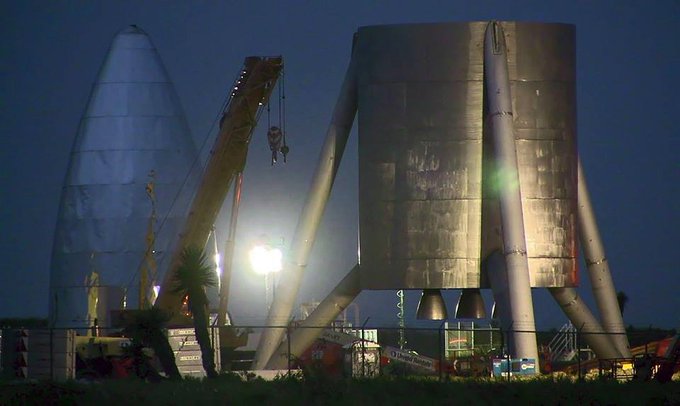 Musk has posted a number of images showing engineers at work around the nose of the spacecraft.

In December of 2018, Musk tweeted an image of the spacecraft’s nose captioning it simply as Stainless-Steel Starship.

And if you are wondering, will the spacecraft really be made out of stainless steel? The answer is yes.

In fact, Musk explained on Twitter the construction plans of the spacecraft.

Musk confirmed that Starship will use stainless steel just like the Atlas Rocket Family.

However, he said that his new spacecraft will have an entirely different mixture of alloys and a brand-new architecture.

“Unlike Atlas, Starship is buckling stable on launchpad even when unpressurized,” Musk wrote o Twitter.

“I will do a full technical presentation of Starship after the test vehicle we’re building in Texas flies, so hopefully March/April,” he added.

So, if everything goes to plan, we could expect and see the first tests of Starship taking place in a matter of months.

Musk’s rocket is planned to be partially reusable, and capable of flying directly from Earth to Mars.

Musk also believes that once built, the rocket could also be used for travel on Earth, claiming that its passengers could travel anywhere on Earth in under an hour.

And if you want to be among the first to travel with Musk’s Rocket to Mars, it will cost you around $200,000 per person.

HABITS OF A HAPPY RELATIONSHIP

RESEARCHERS FIND THE OLDEST ‘MARINE MONSTER’ THAT ONCE LIVED ON ANTARCTICA

THE ORIGIN AND HISTORY OF BRA