It is a 150 million-year-old carnivorous marine reptile that exceeded six meters in length. It was discovered in the Antarctic Peninsula, at a new paleontological site located 113 kilometers southwest of the Marambio Base.

As you’ve probably found out by now, Antarctica was a really different place in the distant past.

Despite the fact that Antarctica we know today is covered in snow and ice, millions of years ago, this place was teeming with life.

Now, researchers have discovered the fossil remains of a carnivorous marine reptile that lived 150 million years ago on Antarctica.

It is a plesiosaur more than six meters long.

The discovery is of great importance as it is the first record of a plesiosaur of the Jurassic period in Antarctica. The remains were excavated by paleontologists from the University of La Matanza (Argentina) in the Antarctic Peninsula, at a new paleontological site located 113 kilometers southwest of the Marambio Base.

Paleontologist José Patricio O’Gorman, a researcher at the Museo de la Plata (MLP) and CONICET, told the CtyS agency “this plesiosaur record is 80 million years older than what was initially known for Antarctica.” 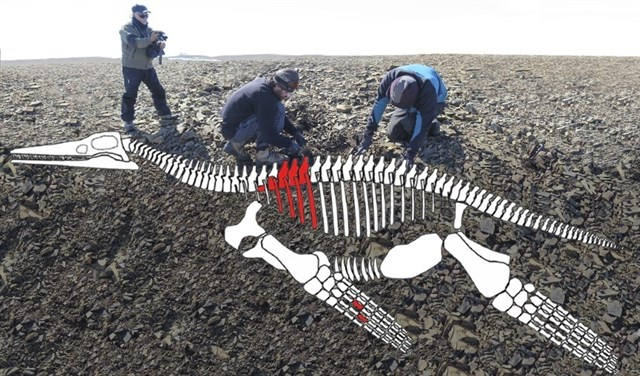 Researchers say that they are positive it is a plesiosaur but not specifically which genre or variety it belongs. Image Credit: CtyS

“It was the first paleontological campaign that we carried out in this outcrop, which is like a frozen, 150 million-year-old sea in an excellent state of conservation”, highlighted the main author of the study that was accepted to be published in the scientific journal Comptes Rendus Palevol.

Dr. Soledad Gouiric Cavalli, MLP and CONICET specialist in the study of Jurassic creatures, told the CtyS Agency that “when walking through the deposit we found a great diversity of fish, ammonites, some bivalves, but we did not expect to find a plesiosaurus of such antiquity; it was amazing”.

The excavation site is located 113 kilometers southwest of the Marambio Base. Image Credit: CtyS

“The find is quite extraordinary because the site does not have the type of rocks in which you can find materials preserved in three dimensions, as is the case of the vertebrae of this marine reptile,” explained the researcher.

The area where the discovery was made can only be reached after a two-hour flight by helicopter from the Marambio Base, so the researchers highlighted the excellent logistics provided by the Argentine Antarctic Institute (IAA).

Dr. Marcelo Reguero pointed out that “these rich and unique deposits in marine Jurassic vertebrates belong to the time when Antarctica was part of the Gondwana continent and was next to Australia, New Zealand, India, Madagascar, Africa and South America.”

The temperature of the seas was much higher 150 million years ago and the world map was very different.

According to Dr. José O’Gorman, this plesiosaurus, besides being the first of its kind in the Jurassic in Antarctica, serves as evidence in favor of the possibility of the dispersal of these reptiles by means of a passage that existed between Africa and Antarctica, which at that time had just separated.

CLICK & SHARE
Previous : THE 2,000-YEAR-OLD ‘BOOK OF GIANTS’ DESCRIBES HOW THE NEPHILIM WERE DESTROYED
Next : JEREMY AND THE MAGIC LOBSTER